Wish I had not said that.

Most of us have made comments that we immediately regret, especially when someone says something in reply to put things in perspective.  I came across a story recently that illustrated the point well.  It’s from a speech by Ron Warfuel, President of the Brotherhood of St. Andrew, on June 27, 2008.  You will be amused or offended depending on your point of view.

…Finally, I want to share with you a brief story sent to me from a faithful Brother.  The story takes place at a conference in France where a number of French and American engineers were assembled.  During a break, one of the Frenchmen returned to the conference room and commented, “Have you heard the latest stunt pulled by President George Bush?  He sent in an aircraft carrier to Indonesia to help the tsunami victims.  What’s he gong to do, bomb them?”
A Boeing engineer quietly stood up and replied, “Our carriers have three hospitals on board that can treat several hundred people; they are nuclear powered and can supply emergency electrical power to shore facilities; they have three cafeterias with the capacity to feed three thousand people – three meals per day; they can produce several thousand gallons of fresh desalinated water from the sea; and they can carry up to six helicopters for use in transporting injured victims to and from their flight deck.
The United States has seven such ships.  How many does France have?…”

The Beacon Hill Institute at Suffolk University has released its Eighth Annual Competitiveness Report.  Competitiveness is defined as ability to attract and retain business and to provide a high standard of living for its residents over the long run.

Click here for the complete report in pdf form to see how your state was ranked.

It must be someone else’s fault because it can’t be mine.

According to an article in the Northwest Arkansas News, a couple has filed a lawsuit asking for more than $3 million from a local McDonald’s Restaurant, et al after nude photos of the wife appeared on the Internet.  Apparently, the photos came from the cell phone of the plaintiffs, WHO LEFT THE PHONE IN THE RESTAURANT!

The staff at First Books made a list of their Top 10 Reasons to Read.  Their list follows, and following that is MY top reason to read:

10. You need a backup in case the TV and Internet go out.
9. It’s fuel efficient.
8. A flight attendant will never ask you to turn
off your paperback.
7. It’s fun.
6. If you like to read, you’ll never be alone.
5. No commercials.
4. Reading makes school a lot easier.
3. It’s less fattening than chocolate.
2. So you can say with authority: the book was better.
and our top reason to read:
1. (Almost) everybody’s doing it!

Now for my top reason to read:  If every child in my state (Mississippi) could read at grade level it would do more to change my state for the better than just about anything else.

Tagged first book, firstbook.org, if every child could read, literacy, reasons to read

Detroit auto workers’ compensation compared to the rest of us.

This slide if from Professor Mark Perry’s blog.  He in the economics and finance department at the University of Michigan.  For more on what bailing out Detroit might really mean, I’ve copied and pasted an article from the Wall Street Journal below. 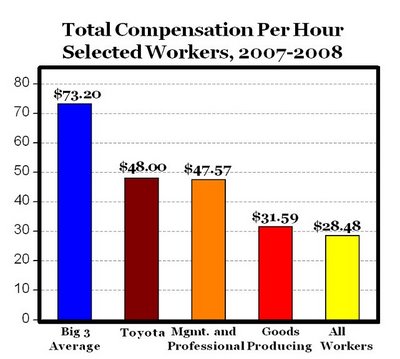 A bailout might avoid any near-term bankruptcy filing, but it won’t address Detroit’s fundamental problems of making cars that Americans won’t buy and labor contracts that are too rich and inflexible to make them competitive (see chart above of the $25 pay gap between the Big 3 and Toyota/Honda, data here). Detroit’s costs are far too high for their market share. While GM has spent billions of dollars on labor buyouts in recent years, it is still forced by federal mileage standards to churn out small cars that make little or no profit at plants organized by the United Auto Workers.

Rest assured that the politicians don’t want to do a thing about those labor contracts or mileage standards. In their letter, Ms. Pelosi and Mr. Reid recommend such “taxpayer protections” as “limits on executive compensation and equity stakes” that would dilute shareholders. But they never mention the UAW contracts that have done so much to put Detroit on the road to ruin (see chart above). In fact, the main point of any taxpayer rescue seems to be to postpone a day of reckoning on those contracts. That includes even the notorious UAW Jobs Bank that continues to pay workers not to work.

A Detroit bailout would also be unfair to other companies that make cars in the U.S. Yes, those are “foreign” companies in the narrow sense that they are headquartered overseas. But then so was Chrysler before Daimler sold most of the car maker to Cerberus, the private equity fund. Honda, Toyota and the rest employ about 113,000 American auto workers who make nearly four million cars a year in states like Alabama and Tennessee. Unlike Michigan, these states didn’t vote for Mr. Obama.

But the very success of this U.S. auto industry indicates that highly skilled American workers can profitably churn out cars without being organized by the UAW. A bailout for Chrysler would in essence be assisting rich Cerberus investors at the expense of middle-class nonunion auto workers (see chart above). Is this the new “progressive” era we keep reading so much about?

If Uncle Sam buys into Detroit, $50 billion would only be the start of the outlays as taxpayers were obliged to protect their earlier investment in uncompetitive companies.

Loaning money to myself. My local bank and the bailout plan.

The Average Joe has got to be suspicious of the taxpayer-funded bailout when a recent article reports that Trustmark National Bank in Jackson, Mississippi is applying for $215 million of the bailout money because the bank “…simply wants to take advantage of attractively priced capital.”  I can’t fault Trustmark for doing so, but come on federal government!  It’s one thing for small businesses to get taxed and regulated like crazy, but now they, in effect, get to loan money  at a low interest rate to themselves to pay back at a higher interest rate?!

Northern District Public Service Commissioner Brandon Presley has written a letter to Mississippi’s congressional delegation asking for an inquiry into the TVA board’s decision to increase the utility chief executive’s pay by $500,000, according to a recent Clarion-Ledger article.

The raise comes a month after Tennessee Valley Authority put into effect a 20 percent rate hike that raised the average residential monthly power bill by $15.80 to $19.80 — the largest power rate hike in 30 years.

On October 30 the TVA Board approved a new economic development initiative that will offer incentive awards to existing industries that remain in the Tennessee Valley. Click here for more details.