Jackson, MS to be featured in Southwest Airlines magazine.

Just learned from Ben Allen, effervescent executive director of Downtown Jackson Partners that Jackson, Mississippi will be featured in the August issue of Spirit, the magazine of Southwest Airlines. In its history, it has featured four cities: Jacksonville, Tampa, Tulsa and Kansas City. According to Allen, representatives of the Jackson Convention and Visitors Bureau, the MetroJackson Chamber, Watkins Development and Downtown Jackson Partners made a presentation about the Capital City to the magazine’s production company two days ago. Twenty cities were in the hunt for their 36-page, August 2009 issue, 2.3 million circulation edition. 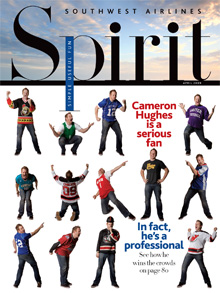 ‘You’ve got to find what you love,’ Jobs says

This is the text of the Commencement address by Steve Jobs, CEO of Apple Computer and of Pixar Animation Studios, delivered on June 12, 2005.
“I am honored to be with you today at your commencement from one of the finest universities in the world. I never graduated from college. Truth be told, this is the closest I’ve ever gotten to a college graduation. Today I want to tell you three stories from my life. That’s it. No big deal. Just three stories.  … ”  Read the complete speech.

How would you like it if your company increased revenues 7.1 percent profits 5.3 percent during the past year, and you heard Wolf Blitzer say this:  “(your company) has been suffering a startling setback.  Anyway, ahead, the discount giant’s new fall.  What’s going on?”

The company is Wal-Mart and the comment was made by Blitzer at about 3:45 p.m. CDT on The Situation Room.  What’s going on is that Wal-Mart went from Number 1 to Number 2 on the Fortune 500.  And that’s a “startling setback?”  Sounds like media hype to me.  The Situation Room went on to list companies as “Winners and Losers” based on the list.  Give me a break.  I wonder if $150/barrel oil had anything to do with ExxonMobile going to Number 1.

Communities should consider dropping the term “quality of life” and replace it with “quality of place.”

An interesting article by Jason Gray about Leflore County, Mississippi is available on the DailyYonder Website.  Some highlights and tidbits:

The two businesses are the Viking Range Company, a high-end kitchen equipment manufacturer, and Staplcotn, the world’s largest and oldest cotton cooperative.  These two firms are the new and old South cheek by jowl — a stark contrast between entrepreneurship and an agricultural subsidy system that underwrites white privilege in a region that is predominantly poor and black.    It is also a contrast between a business that creates good jobs and a prosperous economy and one that does not.

But for the town of Greenwood and Leflore County, a new South is rising. Inside the small downtown of Greenwood you can see restored old buildings, foot traffic on the sidewalks, and energy. The reason? In large part it’s because of the Viking Range Corporation, a locally-owned business that now has three plants in the area employing more than 1,000 people. A renovated hotel, The Aluvian, is perhaps the finest in Mississippi, and hosts travelers from all over the world who come to take cooking classes at Viking.

More locally, from 2005 to 2007, the USDA subsidized commodity crop producers in Leflore County to the tune of $48.8 million, according to the Environmental Working Group’s most detailed compilation of publicly available data. These payments dwarf the $1.2 million spent by the USDA Rural Development program in Leflore County over the same three years.  Other federal small business and community development grants added another $1 million. These totals probably miss some workforce training investments in the county. Still, the margin between the amount spent on commodity subsidies in Leflore County and the amount spent on rural development is enormous.

Yes, I really like my iPhone. And why not? Two days ago at my annual physical my doctor and I were comparing our iPhone apps. He showed me an impressive application (Epocrates) that is basically a drug reference encyclopedia. I immediately downloaded the free version. Yesterday, I was having lunch at the Cotton District Grill in Starkville when I heard a song that I liked, but did not know its title. My Shazam application recognized it and I downloaded without hesitation to add to my music library. Just now I heard about a new application that allows one to track the government recovery spending.

Transparent gov is an iPhone application from NIC that allows users to track spending under the stimulus bill. It’s very impressive and worth checking out. Thankfully, applications like this allow average citizens to follow some of this money. And, believe me, it is worth following. If you don’t have an iPhone, but want to follow the spending check out NIC’s related Web site – http://www.transparent-gov.com.

Just a few weeks after retention bonuses at American International Group became a national scandal, Fannie Mae and Freddie Mac, the two mortgage-financing giants that the government rescued last fall, have outlined plans to pay an additional $159 million in bonuses to retain employees in 2009 and 2010, on top of the nearly $51 million already paid out last year.

Nearly a year ago a small crew of young filmmakers, artists, and actors gathered at One To One Studios in the Millsaps Arts District to enter into an exotic world of their own. Production for “Teal Optical” began by building an entire set made out of found materials: planks, plants, and abandoned television screens. Where indie concerts are now held on a weekly basis at One To One, there existed a completely new world where Teal, the main character, encounters unusual creatures who inhabit this world.

“Teal Optical” tells the story of a young girl who loses her sister to a careless driver. Her family does not even sympathize and in an emotional state, Teal runs away from her reality to find herself lost in an unusual forest. Here she meets creatures who speak in another language and help her find her way through the forest. It is a celebration in the forest and they discover what magic music holds as Teal finds her happiness deep in the woods.

“When we shot the film, I told the creatures to speak in a different language – not Spanish or German, but an intelligent form of gibberish. They all nailed it and then we subtitled it in post. It really makes you feel like you’ve been placed into a different and new world.” – Clay Hardwick, writer and director.

The entire film was shot and produced in central Mississippi by Mississippians. Featured in the film are Elizabeth Boteler (Teal), Matt Doman, Charles Orr, Heather Thurgood, Luke Bertram, and many other talented actors. The film was written and directed by Clay Hardwick, assisted by Morgan Welch. Daniel Guaquata coproduced the film and was the foley artist as well as musician for the soundtrack. Music by Animal Collective is featured during the opening credits.

Join much of the cast and crew at the 2009 Crossroads Film Festival this Saturday night, April 4th at Parkway Place Theatre in Flowood, MS at 9pm. The film will screen with other shorts on Screen B. For more information and to purchase tickets go to: http://www.crossroadsfilmfestival.com

Please visit www.TealOptical.com for more information about the short film.

Through April and May, the film will be screening at select sites in Mississippi and around the South. The first will be at One to One Studios. Check the web site for dates and times. All screenings will be free (except for Crossroads) with donations encouraged. Also look for the official “Teal Optical” DVD soon including other works by the cast and crew of “Teal Optical.” You can purchase this through the web site for $10.

Get INSIDE the box?

It seems that everywhere I go I hear experts advising businesses, colleges, nonprofits and other organizations to concentrate on what one does best.  “Focus” is the word.  Use this time to “sharpen the saw,” as S. Covey would say.  The message from John Moore, marketing executive who helped Starbucks and Whole Foods Market become icons, at a Millsaps College forum yesterday was basically the same.  Don’t stray to far from your core products and services, he intoned.

I had to miss the event because last night I was speaking to the Monroe County Chamber of Commerce Annual Banquet in Amory, Mississippi.  Three hundred people were in attendance and it was an impressive and optimistic group of people.  Tony Green, the executive director who came onboard just over one year ago, is obvioulsy doing an outstanding job.  By the way, the local government center is set on a beautiful waterway in what has to be one of the best government building settings I have ever seen.