Our second day of our dining local adventure began with a plethora of emails, Facebook comments and blog comments.  What we learned immediately was that even defining “dining local” can be a challenge.  For example, is dining at a franchise establishment owned by a local owner considered dining local?  It would be easy to say that we will not dine at franchise restaurants, but what about local franchises such as Cups Espresso Coffee or McAlister’s Deli?  And what if we buy something from a roadside vendor – bananas, for example – that is surely not local? Thus, we are at the point where we need to make some decisions.

First, locally-owned national franchises.  Even though most of the profits may stay local – and even if the employees are contributing to the local economy – we are not going to include locally-owned franchises as part of our adventure.  Sorry, Subway, McDonald’s, etc.  We want to dine at establishments that are even more locally-owned.  Second, if the franchise is a Mississippi franchise, we consider that to be locally-owned.  So, Cups, Sweet Peppers Deli, Mugshots Grill & Bar, etc. you are in.

Today was easy as far as dining goes.  We had breakfast at home (I make a mean Belgian waffle, with blueberries from Crystal Springs on top no less), lunch at River Hills Club, where we played in a Memorial Day tennis social tournament and a late afternoon frozen yogurt at Sweet Tree Yogurt in Ridgeland.  It was a light dinner at home.

We are headed to the Mississippi Gulf Coast so it should be very easy to dine local unless… someone invites us out to dinner at a non-local place.  So far, we are in good shape.  We have a dinner invitation to dine at Mary Mahoney’s, which is about as local as one can get on the Coast.  We did consider having dinner at Ruth’s Chris Steak House at the Hard Rock Biloxi on May 31, which is our wedding anniversary (number 32 – Boy how I love that woman), but then realized that it is not locally-owned.

A very special thanks to those of you who have offered suggestions on where to eat local in Mississippi.  I had never heard of some of those places, and I look forward to paying them a visit.

So come back to this cyberspot every day or two to see how we are doing.  We appreciate your comments and recommendations.

How long will Carol and I be able to dine local?

As many of you who follow this blog know, my wife Carol and I are involved in economic development.  That means we are interested in local economies.  News stories abound about how local businesses of all types have been affected by everything from globalization to mergers and acquisitions.  We discussed ways to support local businesses.  That’s a lot more difficult than one would imagine because of imports of just about everything.  After much discussion we decided that one thing we could do would be to choose only locally-owned establishments when we dine out. No national franchises.

As we got deeper into the discussion we realized that this will be no easy task.  Just yesterday we grabbed a sandwich and a salad for lunch at a nearby Subway.  Also, one of Carol’s favorite culinary pleasures is a milk shake from Chik-Fil-A.  I often stop at McDonald’s for a cup of coffee when I’m on the road.  We realized that this is not going to be easy, especially given the fact that both of us travel a fair amount.  So we came up with some rules.  They are as follows:

1.  No nationally-franchised eateries unless they are owned by Mississippians (thank you McAlister’s Deli);

2.  Small purchases, such as a cup of coffee, are not allowed;

3.  Takeout is the same as dining at a restaurant; and

4.  This quest only applies in the State of Mississippi.

I’ll do a weekly blog post on our project, but if you want to follow every meal not eaten at home then you can do so on Twitter, where I’ll tweet every time I eat out.  I’m at @philhardwick.

This should be interesting.  And now we are off for jazz brunch with friends at Table 100, a locally-owned restaurant in Flowood.

Where is your search box?

I’ve been updating links to community leadership programs this afternoon (see tab above), and have been surprised to see how many chambers of commerce and economic development organizations do not have a search box on their websites.

The Six Best Places to Hide Your Strategic Plan

My column in next week’s Mississippi Business Journal deals with hiding the strategic plan after having been through the strategic planning process. Read the column for the full discussion, but for now here’s the list:

Recent graduates: Here are the three keys to success.

Success in the workplace is a complicated matter.  Nevertheless, I have found that there are three basic things that are characteristic of people who have successful careers.  Might as well label them as The Three C’s.

Competency – First and foremost, a person must be able to do the job, whether it’s flying a plane, driving a truck or operating a word processor.

Communication – The most successful people have an ability to communicate, especially to speak well in front of a group.

Connections –   My students want to argue with me when I tell them how important this is.  For better or worse, it’s a fact of life.  A better job comes from knowing people, expanding one’s network and especially displaying one’s work to others.

Mississippi counties that are gaining (and losing) population.

Most of the nation’s rural counties lost population from 2010 to 2011, according to an article by Bill Bishop in The Daily Yonder.  Most of the loss was due to outmigration. 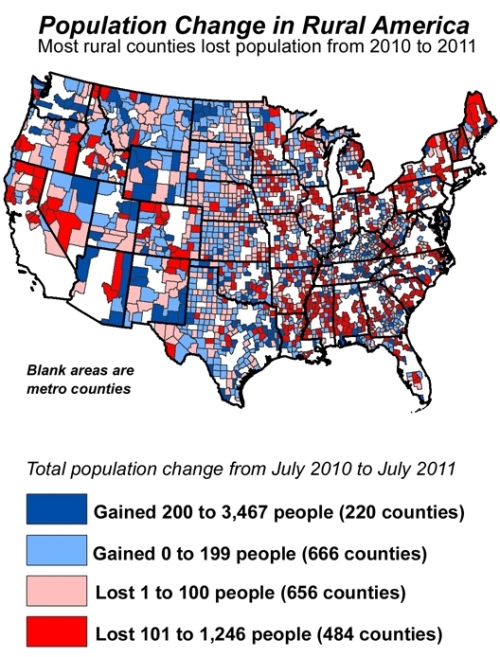