The Winter Olympics and the World Cup have come and gone. We saw a lot a flags. Some are really beautiful, and some are really ugly. So what makes a great flag?

The answer to that question can be found in a great little booklet compiled by Ted Kaye and published by the North American Vexillological Association (NAVA). Here are the five basic principles to create an outstanding flag for your organization, city, tribe, company, family, neighborhood or even country:

1. Keep It Simple – the flag should be so simple that a child can draw it from memory;

2. Use Meaningful Symbolism – the flag’s images, colors or patterns should relate to what it symbolizes;

3. Use Two or Three Basic Colors – Limit the number of colors on the flag to three, which will contrast well and come from the standard color set;

4. No Lettering or Seals – Never use writing of any kind or an organization’s seal; and

5. Be Distinctive or Be Related – Avoid duplicating other flags, but use similarities to show connections.

It may surprise some people, but quite a few cities in Mississippi have a flag. A first-time visitor to the annual conference of the Mississippi Municipal Association will see an opening ceremony featuring a parade of over two dozen flags. Jim McIntyre, owner of A Complete Flag Source in Jackson, Mississippi, says that a flag is a symbol of pride. He advocates more use of city flags by communities around the state, especially at entrances to cities and at every public building.

Under Mayor Kane Ditto’s administration, the City of Jackson went through a flag creation process featuring substantial community input and involvement. People submitted ideas and designs and a flag was adopted. It has a green background and features single vertical and horizontal white lines with a gold star in a blue circle at the intersection of the lines. The lines represent Jackson’s location at a major national crossroads, while the star symbolizes the city’s designation as the capital of the state. The flag was certainly successful from a design standpoint. It impressed the members of NAVA so much that in its 2004 American City Flags Survey Jackson’s flag placed 12thout of 150 flags. According to NAVA Web site, NAVA members preferred simple, brightly-colored, and distinctive flags; they scorned flags with complicated designs, city seals, or writing

Symbolism is important to flag design. The booklet referred to above provides plenty of examples of proper and improper use of symbolism. Take Italy’s flag, for example. It has three vertical stripes – one green, one white and one red. The vertical orientation is just the opposite of many European flags, which have their stripes displayed horizontally. Italy’s flag design symbolizes a challenge to the ruling kingdoms of Europe. On the other end of the symbolism scale, Libya’s flag is solid green to symbolize Islam. It is so simple, according to Ted Kaye of NAVA, that it does not represent a country, and when shown in black and white it had no meaning.

One of the things to avoid in flag design is the use of writing or seals. South Dakota’s flag, which uses a seal and writing, is the example of a bad flag. The name of the state actually appears twice on the flag. South Carolina’s flag, which depicts a white crescent and a palmetto on a field of blue, is used to illustrate a good flag having no lettering or seals.

I cannot resist pointing out the Virginia state flag. The flag of the state that is “for lovers” has a woman warrior, with one breast exposed, standing with one foot on the on the shoulder of a male fallen warrior. The flag is on a field of dark blue and contains the seal of Virginia with the Latin motto “Sic Semper Tyrannis” – “Thus Always to Tyrants”. The two figures are acting out the meaning of the motto. Both are dressed as warriors. The woman, Virtue, represents Virginia. The man holding a scourge and chain shows that he is a tyrant. His fallen crown is nearby. It was adopted in 1776. 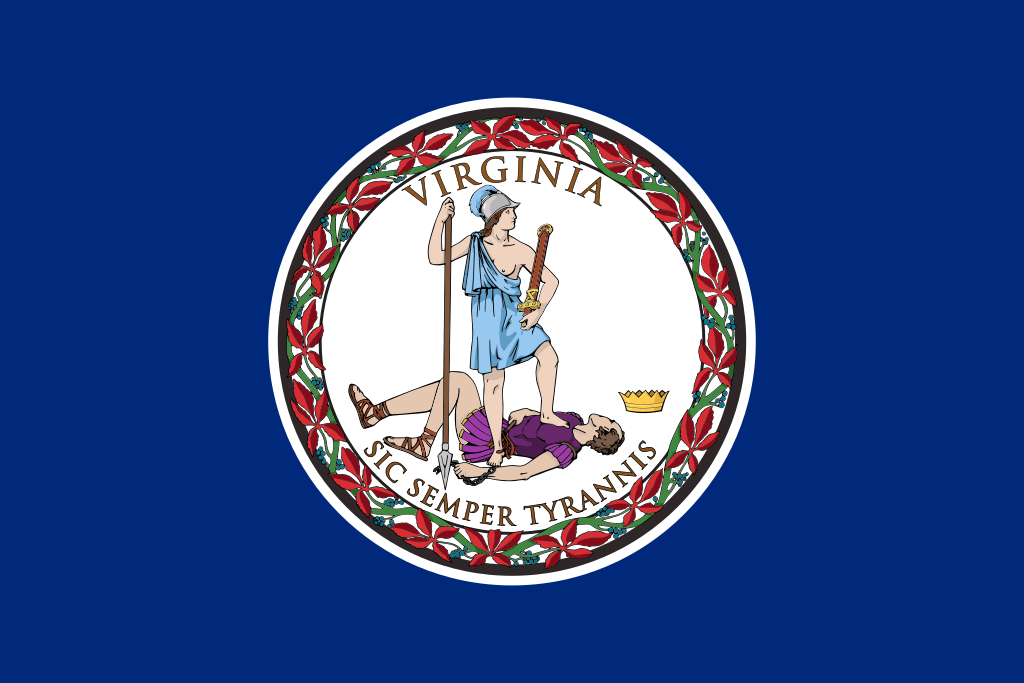 Finally, the flag of the United States of America is not only rich with symbolism in its design, it is one of the few – perhaps the only – flags in which the flag itself is the subject of the national anthem of the country. So here’s to the Star Spangled Banner.